The Rotunda of Thessaloniki: a prickly debate 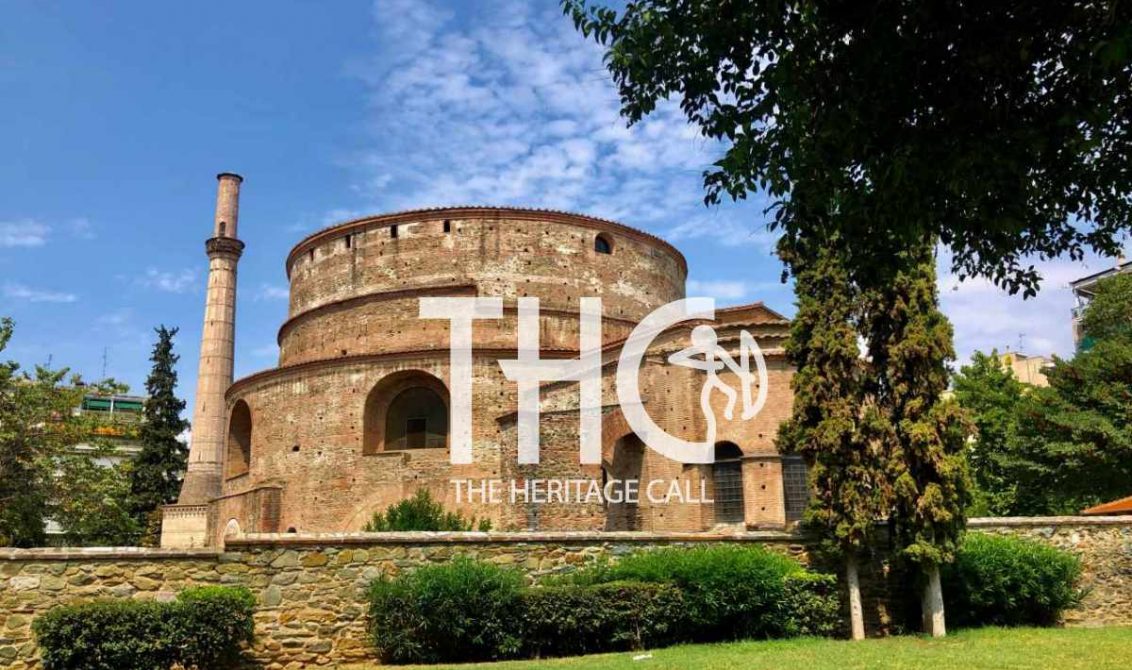 Dr Christina Aamodt is a Greek archaeologist. She studied Prehistoric Archaeology in the UK, where she received her PhD in 2006. She has worked on a number of projects around Greece, including rescue excavations and preservation projects, such as the conservation of the agora of the Hellenistic site of Pella and that of the ancient theatre of Dodona. In 2019 she completed an MA in Museum Studies.

I am Christina and I am a Greek archaeologist. Due to the current pandemic, which had barred travelling, last summer I decided to explore my local area and visit one of its most important monuments: the Rotunda of Thessaloniki. This small trip led me to ponder the site’s controversial past and present.

The Rotunda of Thessaloniki, also known as the Church of Saint George, is one of the most well-known monuments of the city, yet for many years it was closed to the public due to preservation works. Even though I was born and raised in Thessaloniki, I had never visited the monument. Being an archaeologist and having visited a number of magnificent monuments, I did not expect to be so impressed. The scale of the Rotunda, and particularly its outstanding mosaics left me speechless.

The building was constructed in 306 CE, during the reign of the tetrarch Gaius Galerius Valerius Maximianus and got its name from its circular form with a dome, which has been compared to the Pantheon in Rome. Its function is not certain, but it was most likely used as a temple dedicated to Jupiter or the Kabeiroi, or as a mausoleum for Galerius, even though he is not buried in it.

The Rotunda was part of Galerius’s ambitious construction program, when he established his seat at the city as a tetrarch. The program included a palatial complex, official halls, baths and temples, as well as a triumphal arch commemorating his victory against the Sassanid Persians in 297 CE. The Rotunda was connected to the arch through a processional way, which led to the palatial complex uncovered 235 m to the south. The result was an impressive imperial composition forming two units: the palatial complex to the south, and the monumental complex consisting of the arch and the Rotunda to the north. An imaginary axis connected the two complexes architecturally and conceptually, while the fact that the monumental complex stood on an elevated location could also have had a symbolic dimension. This connection remains today through the modern street of Dimitriou Gounari which connects the two complexes, but one can only imagine the awe it would have created in the past.

The impressive scale of the Rotunda (24.50 m diameter, 29.80 m high and 6.30 m thick walls), is better grasped and appreciated once inside the building. It is built with rubble masonry, strengthened at intervals by areas of brickwork. The interior part of its wall is formed into eight rectangular recesses with the area of wall remaining giving the impression of huge pillars. The northern most of these recesses functioned as an entrance. Above the recesses are eight large windows and higher up, at the base of the dome, are eight lunettes. The massive pillars are relieved by the small niches found in them. The interior wall was decorated up to the base of the dome with slabs of coloured marble of which nothing has survived.

During the early Byzantine years, the monument was converted into a church dedicated to the Archangels. To function as such, a number of modifications were made, such as the construction of a sanctuary with a niche on its east side and the creation of an entrance on the west, with the addition of a propylon and two chapels on either side. The top of the dome, which was initially open to admit air and light (opaion), was closed in and decorated with the figure of Christ. At the exterior of the building, a roofed stoa was constructed following its circular form. Of these modifications, only the sanctuary survives. These alterations, however, had an impact on the monument’s form, resulting in the collapse of the sanctuary’s apse and part of the dome above it during an earthquake in the 7th century CE. The damaged part was rebuilt and enhanced by exterior buttresses and the apse was decorated during the 9th century with the scene of the Ascension.

The interior of the monument is decorated with Early Byzantine wall mosaics of exceptional beauty and artistry, the work of local craftsmen. Mosaics decorate both the dome and the arches of the niches. The latter consist of floral and geometric motifs rendered in bright colours, such as blue, green and gold. Those of the dome consist of extensive compositions, displayed in three zones. The lower band presents a number of figures standing in front of buildings. The buildings represent monumental architecture in vivid colours set against a gold background. The figures have their arms extended in supplication and have been interpreted as martyrs. The inscriptions accompanying them give their name, their role in society and the month of their festival. They include military saints, bishops and doctors, all from the Middle East, and together they form an illustrated calendar. Part of this decoration was destroyed in the 7th century CE and was restored in painting by the Italian artist S. Rossi in 1889. The only feature that survived from the middle zone is a row of male feet in sandals against a green background, perhaps belonging to saints or angels. Finally, the centre of the dome was decorated with a medallion with the figure of a standing Christ, of which only a preliminary sketch in charcoal can still be made out on the brickwork. The medallion is ringed with paradisal vegetation and stars, held by four angels, which survive only in part.

The monument functioned as Thessaloniki’s cathedral church from 1524 until 1591, when it was turned into a mosque and a minaret was added to its side. The Rotunda’s minaret is the only one in the city that survived either demolition or fire during the 1910s. It is 35.85 m high and set on a rectangular base. Its conical top and balcony collapsed in the 1978 earthquake that devastated Thessaloniki. Ottoman tombs have been uncovered to the east of the church’s sanctuary, while remains of the same period include the fountain to the west of the church and the porches above the west and south entrances. During the Ottoman period, the monument was known as the Old Metropolis, or Eski Metropol, while it was referred to as the Rotunda by some of the foreign travellers of the 18th and 19th centuries. It remained a mosque until the liberation of Thessaloniki from Ottoman rule in 1912. The monument was then turned back into a church dedicated to Saint George. In 1917 it was converted into a museum commemorating the Macedonian Struggle. The 1978 earthquake caused severe damage to the monument that required many years of preservation and conservation. In 1988 it was declared a UNESCO World Heritage Site, and in 2015, after further preservation and conservation, it finally reopened to the public.

The monument is the subject of an ongoing fierce debate between the cultural and the religious sectors concerning its character and use. The cultural sector supports its secular use as a monument, backed up by Greek archaeological law and a number of judicial decisions. Moreover, the fact that once Thessaloniki was liberated from the Ottomans, the Rotunda was declared a national monument instead of converting it into a church, thus placing it under the jurisdiction of the State, further enhancing the position of the cultural sector that its interreligious character be preserved. On the other side, the Episcopate of Thessaloniki, based on the long use of the building as a church during the Byzantine and Ottoman periods, aspires to turn it back into a place of worship. Since 2015, the Rotunda has been used as a monument and exhibition area, while on specific dates it also functions as a church, in an attempt to reconcile the two opposing sides. Although I am an archaeologist and also a religious person, taking a side is difficult.

However, what clearly emerges from this debate is the complexity of dealing with historical buildings. The re-use of a historical building is not simply a matter of restoring it and making it accessible. It involves the need for multidisciplinary analysis and understanding of the building and more importantly the renegotiation of the socio-cultural and symbolic meanings attached to it. This specific and delicate case strongly demonstrates what this monument means to the people of Thessaloniki as tangible evidence of the city’s multicultural past.

Bente, K. and Hjalmar, T. (2016). The Rotunda in Thessaloniki and its Mosaics. Kapon editions.
Kamilalis, T. (2017). Rotunda: a battle for a ‘temple’ of culture.
Stefanidou-Tiveriou, T. (2020). Thessaloniki: Views of an Ancient Metropolis. Thessaloniki: University Studio Press.