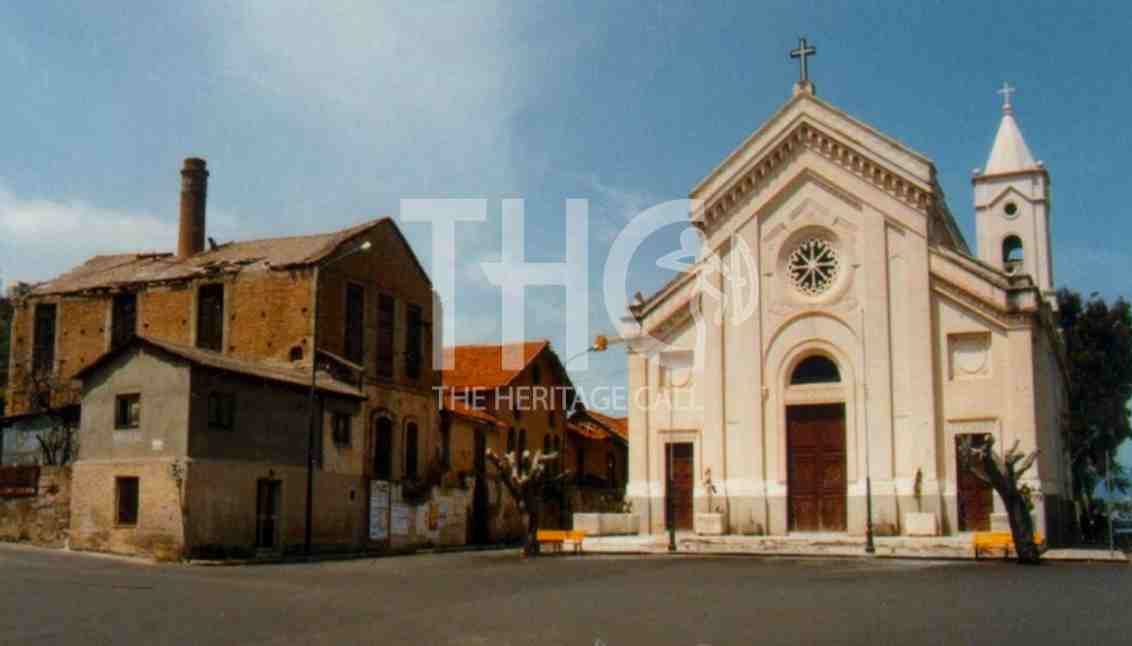 Although in the 19th and early 20th century, industrial archaeology was the subject of discussion of a very few people (Labadi 2001), in the past forty years, the interest in this area has considerably grown becoming an actual branch of Archaeology (Palmer and Neaverson 1998; Bergeron and Maiul-lari-Pontois 2000; Cossons 2000). As such, this discipline deals with the constructs and process of human industrial organisation and labour.

The continuous industrial and technological evolution considerably impacted many industrial sites, which have fallen into disuse (Light 2010). Given that industrial sites exemplify past technological advances and are important milestones in the history of humanity, these sites need strategic plans to be preserved and correctly re-used in new urban and socio-cultural contexts.

This interview discusses the case of the Cogliandro Spinning Mill located in Cannitello (municipality of Villa San Giovanni, Reggio Calabria, Italy), a city known as the closest place to Sicily and for its stunning view of the Strait of Messina.

1.When did the city of Cannitello/Villa San Giovanni start being an important centre of sericulture? How did this activity evolve in time?

Generally speaking, the silk production in Calabria seems to have started between the 1400-1500s. At the beginning of the 15th century in Calabria the mulberry plantations gradually became a communal practice given the advantageous climate. For this reason, the Calabrian centres of Bisignano, Catanzaro and Reggio Calabria have played a central role for the silk production since then. This production fruitfully continued also in the 17th century. In 1780, the government of the Kingdom of Napoli decided to found the first factory-school in Villa San Giovanni which was financed by the Caracciolo family.

Basically, in Calabria a real silk industry did not exist but instead, we can talk about a wide and good quality production of semifinished products or raw materials. These materials were mainly coming from an intense activity of the sericulture promoted by many local farmers who finalised this production for personal use, but it must be said that a part of these semi-finished products were also exported due to their high quality.

The 1800s marks a change in terms of industrialisation and, in fact, the production reached a great peak. In other words, from a seasonal production for mainly personal purposes, the introduction of the steam boiler allowed work on this activity the whole year. Subsequently, many spinning mills were constructed and in 1863 in Cannitello 123 spinning mills were constructed. The production was considerably commercialised internationally with exports in France and in the United States. This important activity continued until the 19th and 20th centuries and definitely ceased at the end of WWII.

2.Who was the Cogliandro family? When was the spinning mill constructed? How many other factories were disseminated in Villa San Giovanni?

The Cogliandro family originated in Cannitello and they were shipowners devoted to maritime trade. Each year in May, the Cogliandro family used to work on collecting silk cocoons which needed to be worked in some centres in Calabria and subsequently sent to the spinning mills including those located in the territory of Villa San Giovanni.

The idea of the construction of a spinning mill was originated by the fact that the sister of Domenico Cogliandro (1868-1961), Mariuccia (1861-1945), got married in 1890 with Mariano Accurso, son of Giovanni Accurso who was already the owner of a spinning mill located in Villa San Giovanni.

Mariuccia together with her brother Francesco (1866-1908) very often visited the factory with great enthusiasm and interest. Both of them gradually became experts and later Francesco became the technical manager of the factory. After a while, Francesco and Domenico Cogliandro decided to start their own activity so they found an appropriate place nearby the Church of Porto Salvo in Cannitello to locate the factory. The construction works begun on April 1895 and were completed in March 1896. In July of the same year, the factory started officially working.

3.How was the factory technically structured?

4.Where did the silk cocoons come from?

Locally and from the whole of Calabria. Trains were transporting these materials and the spinning mills were directly connected to the train stations to facilitate the industry.

5.How many people worked in the factory? Were there mainly women? Is anyone still alive?

In the Cogliandro Spinning mills a number of about 300 people, men and women, used to work. Women were working on the actual production and they were subdivided in two categories: Masters (clearly with more experience) and pupils. The former usually were able to easily establish the grammage of the spun and also supervised pupils’ works. Men usually were managing the steam boiler as well as the many bales of silk cocoons.

Mrs Sara, 95 years old, is still alive and she worked for the Cogliandro mill for many years. She just left when she got married. Usually, married women did not go to work since their husbands provided to economically maintain their family.

6.Was the factory damaged in the past and why? How did the owners react?

Yes. On the 28th of December 1908, the Strait of Messina was hit hardly by one of the most destructive earthquakes in Italy. This event considerably affected many of the neighbours and, unfortunately, many deaths were counted including some of the members of the Cogliandro family such as Francesco who used to sleep in the spinning mill. The attic of the “bozzoliera” collapsed as well as the chimney stack which was later reconstructed but was shorter (fig. 3).

The bozzoliera was recovered and enlarged so that some of the windows were closed in order to make stronger the entire structure. Yet, during WWII the chimney stack was damaged and in fact, it presented many holes made by bullets.

7.When did the factory cease definitely its activity and why?

The factory was active for the entire WWII, but during this period it was reconverted to produce parachutes for the German troops. After the war, the factory ceased its activity and its spaces were used for different purposes.

8.What is exactly the “Project Cogliandro Spinning Mill” in terms of enhancement and safeguarding?

The enhancement project aims at the revitalisation of all the spinning mills located in Villa San Giovanni representing an important witness of our past which risks to be lost. In order to avoid this risk, the project has been thought in a holistic perspective including the knowledge of their history and the dissemination of memories avoiding any speculative re-use of these buildings.

These buildings are thought to be cultural and narrative centres in order to positively impact the territory and the locals.

9.How the old spaces of the factory have been re-thought and what are their new aims?

The project basically aims at rethinking the entire space according to the new exigencies.

10.Has the factory already hosted any cultural events? Which one?

In accordance with the project, the Cogliandro spinning mill opens its doors for cultural events such as festivals, exhibitions and various cultural performances. We were able to host artistic events as well as concerts in the factory and it was a beautiful experience for all of us. Thus, we do want to host other cultural events and get in touch and cooperate with other cultural organisations.

11.Can the enhancement of the other factories disseminated throughout Villa San Giovanni contribute to further touristic development?

There are several factories disseminated throughout this territory, but sadly many of them are just ruins and urgently need to be preserved. I think that the correct re-use of these buildings will certainly impact the territory and, at the same time, the locals can clearly benefit from them in many ways.

The Cogliandro spinning mill, for example, is positioned in a privileged location, at the beginning of the seafront of the Strait of Messina which is one of the most breath-taking and fascinating views of this territory (fig. 5). The combination of the beauty of the landscape together with the presence of these huge industrial remains, as well as the other many historical and cultural witnesses of the territory can considerably contribute to the development of tourism and generally to sustainable development.

12.What would you like to achieve in the future through the re-use of the factory?

We are personally and emotionally connected to this building and given its immense historical and anthropological value, we have been investing many efforts to keep this place alive and to pass it on to future generations.

In the past, this place was populated by many people, voices and it was full of noises and for this reason, we cannot think it as an empty and silent place. Thus, our project aims to re-populate this building and to make it once again alive (fig. 6). This project can create job opportunities for example in the heritage touristic sector and in many other ways which can improve this city. This is what we expect and would like to achieve in the future.

The Heritage Call warmly thanks the architect Benedetta Genovese – Cogliandro to have allowed us to access the spinning mill, to photographically document the buildings and, above all, to discuss the current renovation works and enhancement plan for this interesting piece of cultural heritage.

Among the remaining spinning mills of Villa San Giovanni, the Cogliandro spinning mill is the only one to have undergone a considerable renovation and enhancement plan which will link the past and the future.

Through this still “alive” building, we could understand that the sericulture from a personal activity gradually became an important production which led to a flourishing period in the 1800s in this territory and generally for the whole region. The construction of many spinning mills allowed the creation of many job positions particularly for women who usually stayed home alternating domestic and agricultural works. The city considerably developed and, in fact, the train stations were directly connected to the factories in order to facilitate this activity. At the same time, the plantation of the mulberry trees was considerably intensified impacting visibly on the territory.

It emerges clearly that the concept of refurbishment is not about merely revitalising a building but rather it means keeping history and memories alive for future generations. The strong emotional connection of the Cogliandro family with this building made possible a great enhancement project which did not allow to lose the building and the relative memories. This project will impact culturally the territory of Villa San Giovanni from many points of views.

The Cogliandro spinning mill is an important example which reminds us why preservation / revitalisation of such industrial structures is important.

Grima, R. and Cassar, J. ed. (2013). Approaches to Industrial Heritage: what works? Proceedings of a conference organised by the Farsons Foundation in collaboration with the Department of the Built Heritage, Faculty for the Built Environment, University of Malta on 1st February 2013. Malta: The Farsons Foundation.

Benedetta’s feedback on the initiative The Heritage Call: It was a pleasure to discuss with Dr Mordà about our project. The discussion was very stimulating and it was a good opportunity to share our communal interests and analyse our structure from different viewpoints. Yet, the platform is an interesting virtual place to share case studies and I hope that our example may help and encourage others to keep alive such structures.