The Choragic monument of Lysikrates 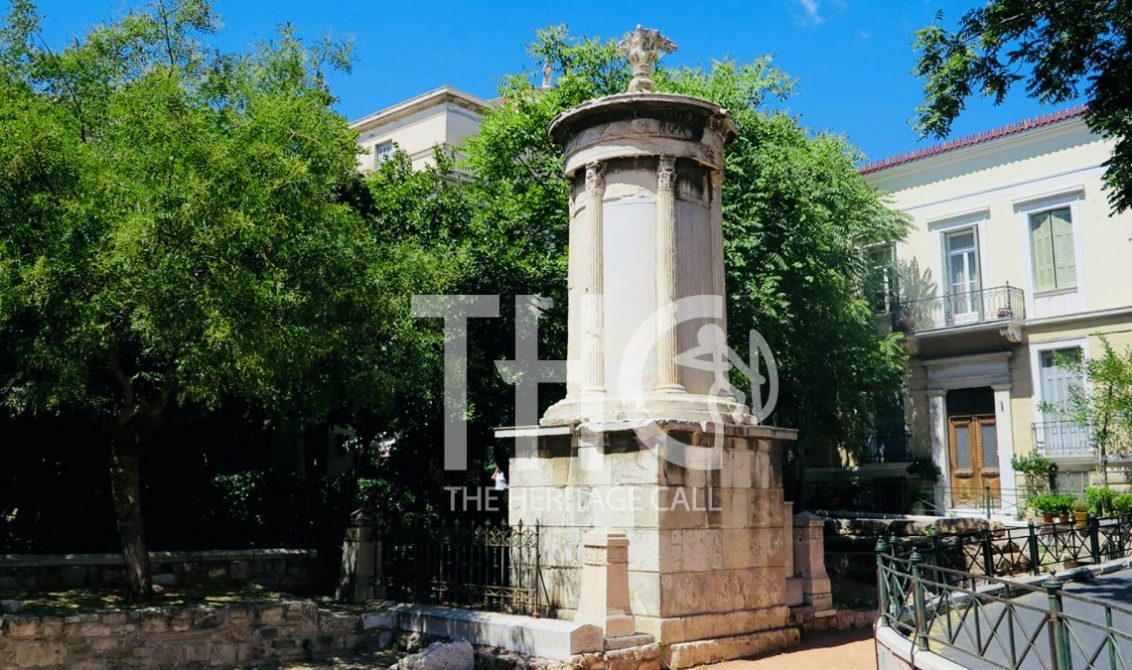 Konstantina Tsiakalaki is a Greek archaeologist who is currently a postgraduate student at the National Technical University of Athens.

During the Classical period of Ancient Greece, the public service of Choregia was an important expression of the democratic regime. It was one of the four liturgies and is it stipulated that a prosperous Athenian citizen was the financial sponsor of a dramatic production which was to be presented at a religious festival, such as the Great Dionysia. If the play was to win, the “choregos” was nominated a bronze tripod as an award, which was expected to be dedicated to the god, Dionysus. In 335-334 BC having won, Lysicrates erected an impressive base wherein the tripod was to be placed upon.

This base has survived until today and is located at the heart of Athens, at the Street of Tripods, which led to the sanctuary of Dionysus. The 4 meter tall circular structure is set on a square base made of porous stone. As far as it can be determined, there was no entrance to the structure. Six Corinthian columns are supporting the top of the monument. The marble frieze, consisting of the principal part of the colonnade, seems to be dated from a later period. The early use of the Corinthian order at the monument of Lysicrates has triggered a great debate. The main frieze depicts the transformation of Tyrrhenian pirates into dolphins by Dionysus. The figures are elegant and passionate. Between the column capitals there is a frieze representing tripods. However, a large percentage of the sculpted iconography is missing or has been deteriorated, making the interpretation of the monument difficult. On the top of the tholos stands the base where the bronze tripod was placed.

The inscription of the monument is highly informative. It states: “Lysicrates son of Lysitheides of Kikynna was sponsor, Akamantis was the winner in the boys’ competition, Theon was the pipe-player, Lysiades of Athens directed, Euainetos was archon”. We may conclude that Lysicrates sponsored a play on behalf of his tribe (Kikynna).

The monument of Lysicrates, known also as “the Latern of Demosthenes”, stands on the eastern side of the Acropolis and it is adjacent to the Arch of Hadrian. In this vicinity, modern Athens is being unfolded; shops, cafes, restaurants. Its special place in the urban fabric along with its commemorative and historical value make it a great surprise for any visitor to the area. It is an “easter egg”, an underrated monument, standing there to surprise any person willing to fling themselves into its history. After all, this was the purpose of its creation.

Le Roy, D. (2004). The ruins of the most beautiful monuments of Greece. Getty Publications.