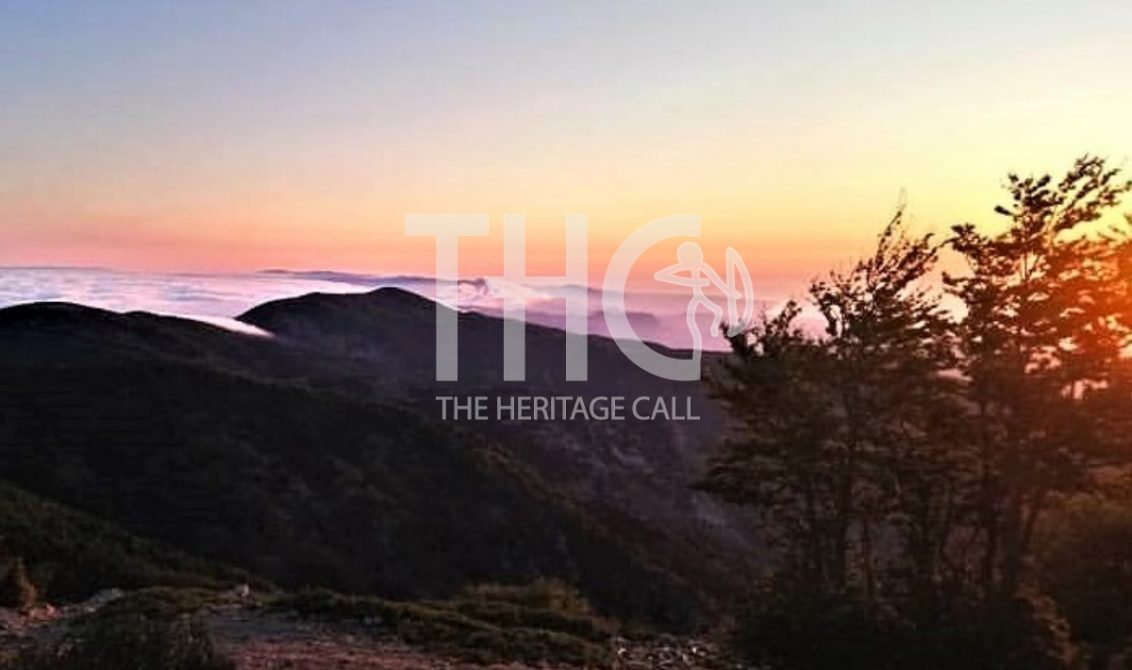 THC-GUEST-blog is back! Today we are very happy to host Mr Freedom Pentimalli.

Mr Freedom Pentimalli is an Italian literary translator, an expert in Modern Greek, Spanish and South American literature and a qualified hiking guide working in Aspromonte and Greece. Freedom is also actively involved in a project to revitalise Greko, a minority language of Calabria.

Born at the same time as the Alps, in a location much further west from its current position, Aspromonte made its way eastwards into the Mediterranean. It became the point on the exclamation mark that is the Italian peninsula and the Apennines (much younger than Aspromonte), and settled in the geographical centre of the Mare Nostrum.

Aspromonte looks like an ancient step pyramid with rounded profiles and covered by green vegetation. Its skin, hardened by time, pokes out in its metamorphic rocks at high altitudes, while dangerous rivers and waterfalls furrow its slopes like wrinkles.

Its beauty is ancestral because everywhere you can find traces of ancient times. For example, covered with fossils (fig. 2) from underwater fauna, hillside terraces were once seabeds; along its western slopes are elephant remains dating back to the Upper Pleistocene; further downstream are remains of Neanderthal man as well as the oldest oak in the world…

Everything indicates that Aspromonte has always been a lively place and, when it is closely explored, it clearly offers many beauties. In fact, the prosperity of this place was understood by the Greeks who, three thousand years ago, chose the aspro-mountain. Although the Ionian side may be rugged (aspro in Italian), the Greek meaning of this word likely refers to the colour white, probably because at that time this place was much snowier than today, or it was used figuratively, meaning immaculate or inviolate. When the Greeks finally settled on the coast, they founded the colonies of Reggio and Locri and gave a commercial outlet to the products of the hilly hinterland.

The place continued to be strategic for Romans, Lombards, Byzantines, Armenians, Normans, Angevins, Aragonese, Spanish, French, Italians and even Americans. The intersection of these peoples shaped the image that the Aspromonte offers of itself today.

I would say that a human erosion has thus been added to the natural one, meaning that a natural flowering has been joined by a cultural flowering.

The last thousand years of solitude are the deepest wrinkle on the face of this area, the one that has scourged the land. On the one hand, the Greeks built ports and temples there, the Romans built roads (Via Popilia and petrare, paved streets, still visible) and markets, the Byzantines relinquished it to saints and monasteries. On the other hand, from the Normans onwards, feudalism stunted every aspiration of development until recently.

Perhaps the Aspromonte itself suffered from it and tried to shake off a reality that did not match its real potential, repeatedly causing every side of the mountain to tremble. The earthquakes of 1783 razed any antiquity that had not already sunk into the mud of time. Today it is a difficult task to appreciate the beauty of those architectures since they appear as mere ruins.

What is Aspromonte today? Above all, it is one of the first Italian national parks, established in 1994. Today it is a candidate to become a Unesco Geopark and is mobilising to obtain the CETS 2 – the European Charter for Sustainable Tourism – which is a truly cutting-edge certification. But now let’s try to give you an overview of this mountain.

The southern quadrant of the Aspromonte massif, very sunny and the homeland of bergamot, is now known as the Grecanic Area, the home of one of the Italian linguistic minorities, the Griko of Calabria, whose language was once spoken throughout the Calabrian territory and beyond. This island of Greek-speakers has shrunk more and more, ending up perched in villages such as Bova, Roghudi and Gallicianò, where it is still possible to hear the language spoken on a daily basis. The rest of the villages speak a dialect which is Romance in lexicon, Greek in syntax.

The eastern quadrant hosts the so-called Valley of the Great Stones, of which Pietra Cappa (fig. 4) is the queen since it is the largest megalith in Europe, standing out amongst the surrounding greenery. Apart from this interesting geological characteristic, it must be underlined that this area has also hosted Byzantine churches, but also peculiar villages such as Gerace, built with the ruins of the ancient acropolis of Locri.

The northern quadrant hosts the backbone that connects the Aspromonte to the Serre Regional Park, with beech and silver fir woods first and then black pine. Although difficult to observe, these woods are home to roe deer, wolves and wild boars.

The western quadrant descends with small and increasingly depopulated villages towards the city of Reggio Calabria, providing several vantage points over the Strait of Messina. These serve as waystations for many species of migratory birds that fly from northern Europe to Africa during the winter.

Like a good pyramid, the top of the Aspromonte does not disappoint. Montalto, located a few kilometres from a disused American USAF base, is the geographic centre of the park and rises 1956 metres above sea level. Its double peak, rounded by the course of time, holds a stunning statue of Christ the Redeemer (fig. 15) from which it is possible to enjoy a gorgeous 360-degree view. This view includes the Aeolian Islands to the west, the Strait of Messina and the volcano Etna to the southwest, and to the north Serre and Sila (and Pollino if the air is clear).

Like any self-respecting microcosm, a peak will be paired with an abyss. Thus, behind Montalto, to the north, a void opens that lies about 1200 meters below Polsi (fig. 9), where a monastery has stood for over a thousand years. A legend says that a shepherd found a cross at the very bottom of that abyss (fig. 10) and, for this reason it was chosen as a place of worship. Today it hosts the most important Marian cult in southern Italy.

I want to stress that the whole mountain is associated with legends. For instance, the Sibyl, an angry sorceress opposed to the Virgin Mary, seems to hide in a cave located between Polsi and Montalto. Similarly, it is believed that in Roghudi, women with the legs of goats – anardae – used to steal children from the gates of the town and, not far away, the fortress of the drako is rumoured to contain an inestimable treasure…

A legend is also associated with the only brigand of Aspromonte, Nino Martino, who lived in the sixteenth century. He was a real problem for the Spanish authorities. This is confirmed by an old document in which he was called ygualador de las haciendas – ‘the Equaliser’ – namely a local Robin Hood who stole from the rich and gave to the poor. Given his position within society, he needed excellent hiding places, so that centuries later some peaks and a cave still carry his name.

Since the Norman era, Aspromonte was a place in which literature flourished, and one witness to this is the Chanson d’Apremont (fig. 12), a chivalrous poem which narrates the fall of Risa (Reggio) and the battles in Aspromonte where the invaders were, providentially, rejected, and thus the ‘southern gate’ of Christianity was saved. Let’s not forget other important writers such as Corrado Alvaro, Saverio Strati, Lorenzo Calogero and Mario La Cava.

How to get to Aspromonte? Apart from a competent association constituted by official Park Guides, many other associations and cooperatives aimed at the tourist and cultural enhancement of this territory have flourished.

The main point of reference is the Italian Alpin Club (CAI), Aspromonte section, founded in 1932, which is based in Reggio Calabria and which will soon open a high-altitude refuge. On the associatin’s website you can find the register of marked paths and download the routes for the GPS. The national park contains six stages of the so-called Sentiero Italia, a walking trail of over 6000 kilometres that crosses all Italian regions.

Depending on the area to visit, the park has visitor centres that provide detailed information on the activities available, the paths, the flora and fauna, the gastronomic specialities of the area and where to taste them and on the accommodation facilities. For the southern quadrant, refer to the visitor centre in Bova, for the high altitude opt for that of Gambarie, for the northern ridge, rely on the recently inaugurated visitor centre in Zomaro (Cittanova). In addition, the national park website is constantly updated, and it is easy to get in touch with its guides.

Last but not least

The Aspromonte is covered by snow every winter and the best place for winter sports, since the early 1900s, is Gambarie (fig. 16). At 1300 meters above sea level, the small mountain centre hosts several hotels and restaurants, together with one of the most attractive ski resorts in the Mediterranean which includes two ski lifts and five slopes of varying difficulty.

BE KIDNAPPED BY ITS BEAUTY!